Under New York City's Clean Fleet plan, the Big Apple will have to cut its fleet-vehicle CO2 emissions by 80% by 2035 from a 2005 baseline. It's an aggressive target, but the city has managed to replace 2,200 gas-powered on-road fleet vehicles with plug-in electric models six years ahead of schedule. With that success, the city doubled its goal and now says it will have at least 4,000 on-road electric vehicles in use by 2025, including electric refuse trucks.

Replacing the light-duty and passenger vehicles with plug-in electrics was easy. Doing the same for the city's heavy-duty vehicle fleet, which includes street sweepers, salt trucks, dump trucks, and the city's 2,346 refuse trucks will take a bit more ingenuity.

"The targets we have are very aggressive, and there's no way we could get to 80% by 2035 without [Mack]," said Rocky DiRico, deputy commissioner of the New York City Department of Sanitation (DSNY). "Without electric tucks that's not happening."

Speaking at the Mack Customer Center in Allentown, Pennsylvania during a demonstration of the Mack LR Electric, DiRico described some of the challenges facing his department.

"We have done some computer modeling of the truck's performance on simulated collections routes, and what we have seen is very positive but it's not real-world," he told HDT. "When we get it home, we'll start the testing by validating the computer modeling on our Class 8 dynamometer in our lab in Queens. After that, we'll start running it on actual collection routes."

The initial test route will be about 18 miles through a middle-class neighbor hood of single-family homes. He couldn't say how many stops it would make, but the department tends to measure collection routes in the number of stops rather than miles. "We'll see how long it lasts, whether we can finish the route in 8 hours," he said. "If that goes well, we can see how much battery capacity is left and from there we can determine if we can do some plowing with it."

NYC is one of a handful of municipalities in the US that equips its refuse collection trucks with snowplows in winter. That's brings huge efficiencies to fleet operations, where they don't have to call in plows to cover the same streets a collection truck is operating. With the diesel collection trucks, range and capacity are nothing to worry about. It's a new ball game with battery-powered trucks.

"Ultimately, we have to get to plowing," DiRico said. "We have to. We can't have two separate fleets. Battery technology has already improved dramatically from the first time we looked at this and we feel that within the next year, the battery capacity will be 50% better still, and that should take us to plowing. If we can't plow with it yet, that's okay. We'll get there. We have to take baby steps."

DSNY collects 10,500 tons of residential and institutional refuse and 1,700 tons of recyclables each day from the five boroughs that make up "New York City." It's also responsible for snow removal on 6,300 miles of streets.

The LR Electric Mack had at the demonstration event is the first of its kind. There's another one in the works that will be delivered later this year to Republic Services in North Carolina for a similar evaluation.

"The timing is right for this type of truck," says Mack's senior vice president for North American Sales & Marketing, Jonathan Randall. "It's a confluence of ideas whose time has come. We have tried other ideas as they came up, such as electric and hydraulic hybrids, CNG, hydrogen fuel cells, LNG; there's no one solution for everything. We just want to continue to try new things. The battery density is getting to the point where we can move 70,000 plus pounds over time and we can handle all the parasitic loads too."

Randall says as the cost and efficiency of batteries improves, more fleets will start testing and eventually adopt. "It's bringing commercial viability closer and closer, but we need fleets like DSNY and Republic Services to make the investment with the resources they have so that the technology becomes viable and available to fleets across the country."

Mack's LR low-cab refuse truck has been in production since 2015, and has seen diesel and natural gas engines. Now, the time is right to convert it to battery electric, says Roy Horton, Mack's director of product strategy.  "The refuse sector has predetermined routes with much lower range requirements than in regional or long-haul, which are important considerations when you're evaluating a new-technology powertrain. The predictability and repeatability helps facilitate the R&D that's needed to get a product to market faster.

"Refuse has a lot of start/stop duty-cycles, so we can take full advantage of regen braking to improve battery life, performance, and the range of the vehicle," Horton adds.

Horton also said the LR Electric will be less expensive to operate because of the reduced need for powertrain related maintenance, such as filters, fluids, DPF service, etc., and the expected reduction in break wear and related maintenance due to the regenerative braking function. "Brake maintenance has been a huge for refuse operators," he noted. "That's all about to change."

A casual observer would be hard pressed to distinguish between a diesel LR and an electric LR without the engine running. The electric version is much quieter of course, and that will be a benefit to the customers located along the routes and the drivers. The chassis isn't visibly different.

"We didn't have to make any big changes," says Randall. "We were able to package what was needed into the existing chassis for the most part. The batteries are along the left side of the chassis, much of the controllers and electronics are located where the engine and transmission used to be, and the motor/transmission assembly is located between the frame rails just forward of the drive axles. I probably make is sound easier than it was, but it actually isn't that much of a departure from the diesel chassis."

The LR Electric was to be moved up to Brooklyn, to it's now home, DSNY Brooklyn North 1 yard, just a few blocks from the Brooklyn Zoo a few days after the demonstration event, which took place in early January. Deputy Commissioner DiRico said he has a battery of tests planned for the truck over the coming months, including range, miles/kWh, payload, acceleration, regen braking, gradeability, charge time/duration, and not inconsequentially, driver feedback.

"I'm very excited at this point to get it to NY and show it off," he says. "I'm looking at a major media blitz on Earth Day in April to show off the truck, but in the meantime, we'll begin the process of testing and evaluating and validating and beating the hell out of that truck."

Charging System:
• Up to 150kW charging power at 200 amps maximum current
• SAE J1772 compliant
• Regenerative braking system can be dialed up and down driver preference

Related: Electric Trucks are Going to be A Hit 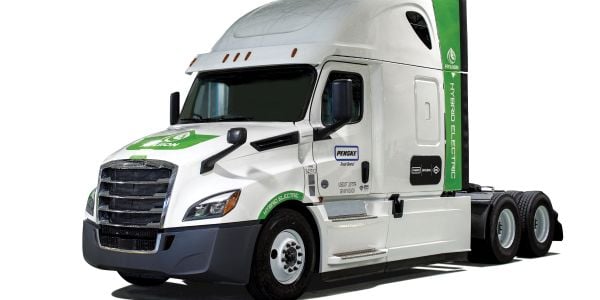 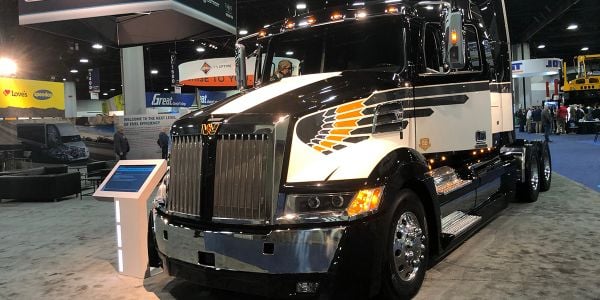 According to a company named Optimus Technologies, it has a new fuel system that allows Class 8 trucks to run on 100% biodiesel-- and a new consortium of partners that intends to validate that claim.