However, at the opening press conference at the 2019 North American Commerical Vehicle Show in Atlanta on Oct. 27, Roeth reported that the trucks and drivers in the Run on Less demonstration hit an impressive average 8.3 mpg for the three-week event, a significant improvement over the national average of 6 mpg.

“Going into the Run, we had no idea what to expect in terms of just how fuel efficient these fleets could be,” Roeth said. “The numbers these trucks and drivers put up demonstrate that it is possible to achieve high mpg in regional operations.”

Related: Should Tractors and Trailers be Mated for Life?

NACFE chose to focus this year’s Run on regional haul operations to demonstrate that with the right investment in technology and with skilled drivers it is possible to achieve fuel milag far above those of the average fleet. Over the course of Run on Less, NACFE also discovered that:

Most regional-haul fleets “sub-optimize” their new truck specs, Roeth said — meaning that they typically spec a truck to reliably run any route on the roster but do not specialize the vehicle to perform at its best in any given route. “I think this proves that regional haul fleets would benefit from taking the extra time to carefully categorize their routes and spec trucks to run specific routes,” Roeth said. “If you have a set of routes that spend a higher amount of time at highway cruise speeds that others, then assigning trucks to those specific routes and spec’ing them with aerodynamic devices and other technologies designed to save fuel at highway speeds will pay dividends to the fleet in the long run.”

Throughout the Run, the three Freightliners, two Internationals, two Kenworths, one Peterbilt, and two Volvos, piloted by drivers Louis Scaruffi, Mark Casey, Glen Williams, Dustin Whitener, Rita Bare, Lou Martinez, Travis Lauer, Michael Tam, Beau White, and Darin Salgado, were monitored by devices installed by Geotab and by data loggers from the National Renewable Energy Laboratory, both event sponsors. Speed, load, elevation changes, number of stops, and weather were monitored during the three weeks of the Run. Shell was title sponsor for the Run, and a host of other companies were event sponsors and supporters.

The participating drivers benefited from the Run on Less Regional demonstration as well. Ploger’s Travis Lauer said that while he focused more on “being on his game,” during his Run on Less runs, he didn’t really do much different than he does every day behind the wheel of his Volvo tractor. “Everyone around me worked really hard to make this a success for us,” Lauer said. “We had Volvo come in ahead of our runs and help us lower the gear ratios and get us ready. And our maintenance department did their usual outstanding job keeping the truck in peak condition throughout the event.”

Tommy Cottingham, director of maintenance for J.B. Hunt, said that while his team hasn’t had the opportunity yet to dig into the data gathered during the demonstration, the fleet is constantly on the lookout for new technology to bring more value to its customers. “Any time we can run our trucks more efficiently and cost effectively, that, in turn, brings more value to our customers,” Cottingham said. “Additionally, J.B. Hunt is focused on being as ‘green’ a fleet as possible and we want the public and our customers to see that. So this NACFE event is a great way of meeting those sustainability and productivity goals.”

The only woman driver in the Run on Less Regional demonstration, Meijer’s Rita Bare, said that her experience driving in Michigan winters helped her immensely, but that she also learned to rely the technology on her Freightliner Cascadia. “I drove a lot like I do in the winter to boost my fuel economy,” Bare said. “That means long rollouts, lots of coasting, lots of watching traffic and trying to keep momentum going as long as possible without coming to a full stop.”

Bare said a Detroit Diesel engineer rode with her for a day before the event to help her wring the most out of the technology features on her truck. “He helped me dial down my active cruise control from a 3.6-second following interval to 2.4 seconds in heavy traffic conditions,” she said. “That allowed me to coast more in those conditions and meter traffic lights more effectively, without slowing down to the point that other cars can cut me off and kill my forward speed, or having to accelerate more to get as often on congested roads.” 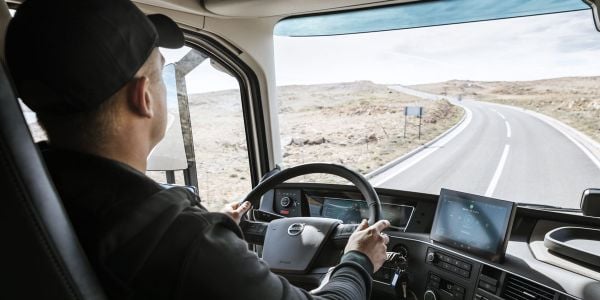