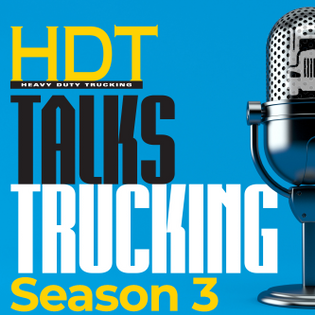 Jim Park speaks with Brad Fulton and Allyson Smith of Stay Metrics to understand why drivers leave, the top 3 things carriers can do to address turnover, and communicating expectations to recruits.

NTSB board members Thomas Chapman and Michale Graham speak with Jim Park about why the agency wants to see certain changes implemented, and how the number of crash fatalities could be reduced substantially if the recommendations were followed by various regulatory agencies.

Doug Lloyd of Averitt Express, Chris Woody of M&W Logistics, and Mike Palmer of Estes Express Lines sit down with Jim Park to discuss being recipients of the HDT 2020 Fleet Innovators awards and the tactics that led them there.

Jim Park speaks with Mike Roeth of the North American Council for Freight Efficiency to discuss how truck and engine makers will meet the 2024 and 2027 GHG reduction targets. Robb Janak of Jacobs Engine Brakes and Joel Morrow, moderator of the 9+ MPG Facebook page share their thoughts on engine cylinder deactivation and advanced engine down speeding.

Season 3 Episode 1: Could Autonomous Trucks Still Be Decades Away?

Stefan Seltz-Axmacher created and ran Starsky Robotics, billed as the first venture to operate a truly driverless truck on a public highway. The company started in 2015 but closed its doors five years later, when, as he put it, the downpour of investor interest became a drizzle. He says investors were not prepared to fund the “last mile” of the project. Will other AI-driven autonomous truck ventures run into similar problems perfecting their technology?

In Season Three of HDT Talks Trucking, we discuss the possible future of autonomous trucks, dig into advanced fuel-saving technology, and hear from the National Transportation Safety Board on why it wants to see drivers tested for obstructive sleep apnea. In addition, we'll meet the HDT 2020 Truck Fleet Innovators and talk to industry experts about reducing driver turnover and improving company culture.