Truck vs. bridge conflicts are both perplexing and entertaining, noted the Columbus (Ohio) Dispatch in a story last week. It was prompted by an incident in which an overheight load banged into an overpass on Interstate 70, damaging a beam and requiring the closure of the freeway for the next 24 hours, according to TV news accounts – just what commuters and other auto and truck traffic needed.

In her lead, the Dispatch reporter did show a bit of humor: “There’s a reason YouTube has such a supply of bridge vs. truck videos. People are endlessly entertained by the image of a too-tall vehicle trying, and failing, to clear the space between road and overhead span.”

She then got into the low overpass that I’ve written about several times, the one on West Central Avenue in Delaware, north of Columbus (pictured). It has earned the nickname, “can opener,” for the numerous times its strong steel girders have peeled back the tops of van trailers.

“‘It’s hilarious, but it’s not,’” said Lee Yoakum, a spokesman for the city of Delaware,” in the story.  He knows that trailers and sometimes trucks are expensively damaged and traffic disrupted as large vehicles are trapped under the bridge.

Signs many blocks east and west of the railroad overpass warn truck drivers, but some don’t see them and proceed on the street (which is State Route 37). A pricey laser-activated warning system has reduced the number of times trucks have bashed this bridge, Yoakum says. But I contend that installing high-intensity LED flashers on existing warning signs might do as much or more to catch the attention of errant drivers.

Anyway, the story is a good look at the situation and why these things happen. It usually boils down to driver error. You can read it here.

Related: Low Bridge Ahead! Some Drivers See It, Others Don't

View Bio
Read more about Trailers Safety In the Media

A high-tech trailer belongs with a futuristic tractor, the builder seemed to state by its presence at Nikola World, says Senior Contributing Editor Tom Berg. 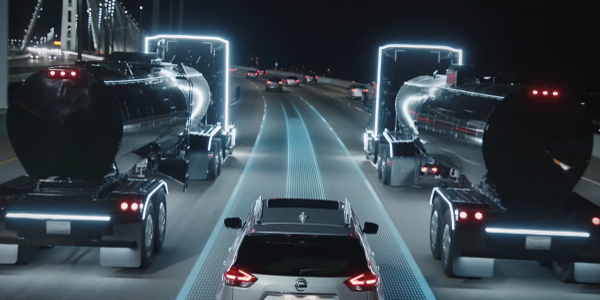