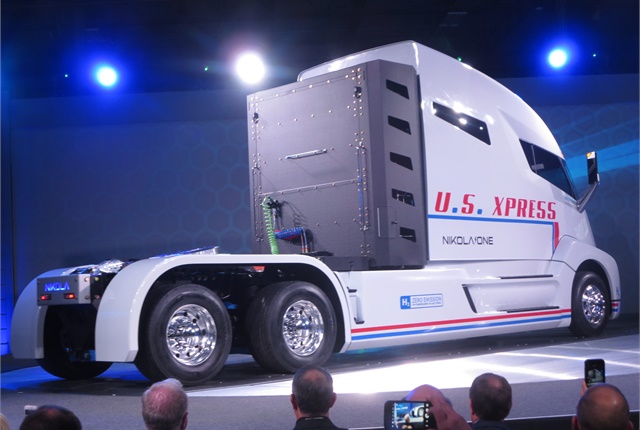 SALT LAKE CITY -- If enthusiasm ensures success, Nikola One, the fuel cell-electric long-haul tractor unveiled Thursday night in Salt Lake City, is a sure thing. A form-fitting white wrap came off the streamlined vehicle amid applause, cheers and whistles from hundreds of guests who think it might really be the game changer for the trucking industry that its proponents claim.

Their cheerleader was Trevor Milton, founder and CEO of Nikola Motor Co., the start-up firm that’s designing the electrically propelled truck and preparing it for production. Milton, who made his entrance on an electric off-road vehicle called the Nikola Zero, opened the presentation noting that development has been difficult, but he offered a quote from Oren Harari that he said captures everything he has been trying to explain to people since the beginning of the project: "The electric light did not come from the continuous improvement of candles." His small company could take the chances on a revolutionary product that a large corporation simply cannot do, he said.

Milton unveiled the truck while providing details of how the truck's electric drive system will be powered by a combination of hydrogen fuel cells, lithium-ion batteries and regenerative braking. Milton said the truck will be in production by 2020, with an expected annual build rate of 50,000 units.

Nikola trucks will be sold and serviced by Ryder System, an agreement announced earlier Thursday. Ryder’s maintenance expertise and more than 800 locations will provide complete support for the trucks, Milton said.

The Nikola One sleeper-cab is aimed at the long-haul market composed of owner-operators and fleets of various sizes. Milton said a daycab version, called Nikola Two, will join the sleeper and expand the applications suited for the fuel cell-electric truck. It looks like a typical conventional-cab tractor.

A Nikola vehicle’s economics appear impressive. Without an engine, transmission, driveline and axles, it should be cheap to maintain and will get double or triple the effective fuel economy of today’s diesel-powered trucks and tractors, Milton said. There'll be no tailpipe emissions; the only byproduct of the chemical reaction by which hydrogen generates electricity is water. A Nikola One will weigh about 17,000 pounds vs. 19,000 for a typical 15L diesel sleeper-cab tractor.

A Nikola One will go 1,200 miles between fill-ups of liquefied hydrogen dispensed at a network of 364 stations that Nikola will build and operate throughout the United States. Fuel cost will be built into the purchase or leasing agreement, so will be supplied at no charge for a truck’s first 1 million miles.

Operating software called Nikola Shipment will combine routing navigation with load finding to minimize miles traveled and maximize revenue. The software will be standard with Nikola One.

So intriguing is the concept that many of those in the audience had put down $1,500 per truck to reserve one or more of them. Nikola has raised about $4 billion from the orders alone, Milton claimed.

Customers include KTI Ltd. of Pulaski, Virginia, a small fleet whose vice president, Adam King, said they ordered one; and U.S. Xpress, the giant operation in Chattanooga, Tennessee, whose chairman and CEO, Max Fuller, has reserved enough that his fleet's name is emblazoned on the Nikola One prototype.

“I’ve come up here five or six times to talk with them, making suggestions” on how the truck should be designed for what it must do, Fuller told HDT. In an introductory video he declared, "I've no ownership in the company, but I can tell you that I'm pretty excited about how the company's coming forward, and how the product's coming to the market."

Nikola One is intriguing, but “it must hold up,” said Jay England, CEO of Utah-based Pride Inc. “It’s got to be durable and reliable.” Whether or not it is will be discovered through real-life operations.

That’s why KTI ordered just a single Nikola One, said Joshua King, Adam’s father and the company’s president. “We’ll start with that and see.”

The Kings ordered the Nikola because they think it will appeal to drivers, “and the driver shortage is a big concern to us now,” he said. “They’ll like it for the comfort, and the power, and the quietness.”

A fully independent suspension supplied by Meritor will smooth the ride, Milton said in his presentation, and the silent hydrogen fuel cell and electric motors will contribute to quietness. Together the six motors will make up to 1,000 hp and 2,000 lb-ft of torque, enough for "unbelievable acceleration" and to move an 80,000-pound rig up a 6% grade at 65 mph, Milton claimed.

The fuel cell produces electricity that’s sent to bank of advanced lithium-ion batteries, from where it’s sent to the motors, one at each wheel position of the three-axle tractor. Batteries are mounted between frame rails for a low center of gravity and high stability. Wheel-by-wheel torque vectoring helps in cornering. Regenerative braking sends more electric energy to the batteries, and does 85% of the stopping a rig requires. Air disc brakes take care of the rest.

Milton gave no exact production date, and while guests who have placed orders are simply unsure of when they will get their trucks, they didn’t seem edgy about it. Milton did announce that the first 5,000 units will be produced by Fitzgerald Gliders in east Tennessee.

Meanwhile, Nikola will build a plant with a capacity of 50,000 trucks a year, using many robotic assembly operations to minimize assembly errors. Milton and his colleagues are discussing possibilities with several states and will announce a site choice in mid 2017.

Price was not mentioned but might be covered in Friday sessions hosted by Ryder, Nikola trucks' future distributors. One figure mentioned by a fleet manager who had ordered a truck was $400,000 to $415,000 each. 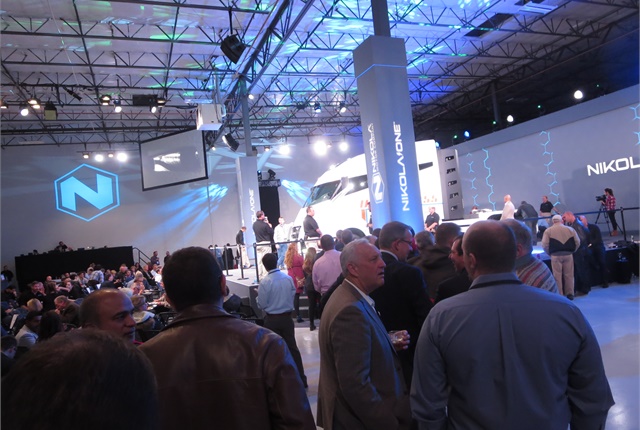 To dispell any notions that Nikola Motor Co. will stumble and disappear, Milton closed his presentation by declaring, "This truck will come to market. That I can guarantee."