The State of Ohio is investing $15 million to install advanced highway technology along its "Smart Mobility Corridor" - a 35‑mile stretch of U.S. 33 northwest of Columbus. It was used Wednesday, Nov. 30 for a demonstration run by Otto, a developer of self-driving vehicle technology .

Gov. John Kasich announced the project today at a ceremony in suburban Dublin. He said the state’s partnership with leading automotive research centers and local governments in the region will create an ideal proving ground to safely test innovative technologies that will change the way people and products are transported in Ohio and across the world.

After the event, Otto's self-driving tractor pulled an Ohio Department of Transportation tanker trailer from Dublin to East Liberty. A driver was in the cab, ready to take over if anything went amiss, but it didn't, ODOT said. Otto also plans to run its truck on the Ohio Turnpike later this week.

“Some of the world’s foremost automotive researchers are working here in Ohio, at both ends of this corridor, and this project provides them with the perfect location and state-of-the-art infrastructure for safely testing autonomous and connected vehicle technologies,” Kasich said.

“Ohio has been at the heart of automotive manufacturing and innovation since the industry’s earliest days.  Those ties strengthen with each passing year and innovations developed here will continue to build on our state’s historic role as a world leader in transportation technology,” he said.

The Smart Mobility Corridor, 35 miles of four-lane, limited access highway, will be equipped by the ODOT with high-capacity fiber optic cable to instantaneously link researchers and traffic monitors with data from embedded and wireless sensors along the roadway.

These links will allow testing smart transportation technologies on a highway that carries up to 50,000 vehicles per day through rural and urban settings in a full range of weather conditions. This data will also provide more frequent and accurate traffic counts, weather and surface condition monitoring, and incident management improvements, said ODOT spokesman Matt Bruning.

“Data collected on this corridor will allow automotive innovators to test and refine jobs‑creating technologies that are going to help move people and products more safely and efficiently than ever before,” said ODOT Director Jerry Wray.

“By being one of the first – and best positioned – states to embrace autonomous and connected vehicle technology, Ohio can also be among the first to benefit from its rewards, giving Ohioans a safer, better driving experience and offering businesses reduced transportation costs, faster access to markets and increased efficiencies,” he said. 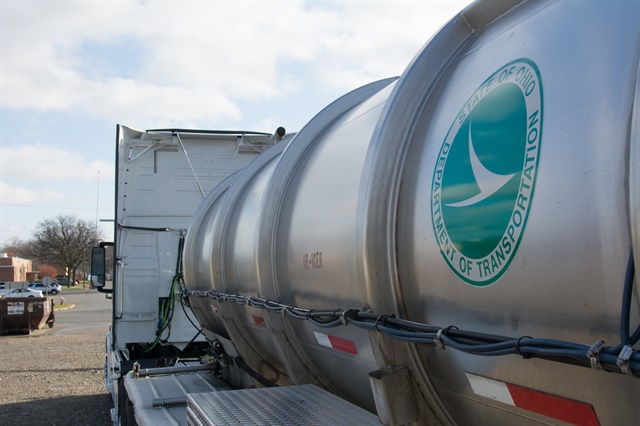 ODOT’s partners in the project include Honda R&D Americas, the Transportation Research Center at East Liberty, and Ohio State University’s Center for Automotive Research. Local governments along the route, including the City of Dublin, City of Marysville and Union County, are cooperating.

The Smart Mobility Corridor will also align with work underway to develop Columbus as a hub for intelligent transportation, spurred by a $40 million “Smart City” grant from the U.S. Department of Transportation and more than $90 million committed to date by private-sector partners.

Work to install sensors and a fiber optic network along the corridor is scheduled to begin in May 2017 and last throughout the summer. Traffic disruptions are not expected during installation.

As autonomous and connected vehicle research expands throughout the state, the Ohio Turnpike with its existing fiber-optic network is set to become the centerpiece of a contiguous, interstate highway test corridor eventually stretching from New York to Detroit and Chicago.