If every commercial vehicle over 10,000 pounds were equipped with an in-cab video-based driver safety system, about 800 lives could be saved each year and more than 38,000 injuries prevented, according to a new study conducted by the Virginia Tech Transportation Institute for Lytx regarding its DriveCam system.

Despite the results, the company is not advocating any type of government mandate.

The study, commissioned by Lytx, was conducted by Jeffrey S. Hickman, the group leader for the Behavioral Analysis and Applications Group under the Center for Truck and Bus Safety at the Virginia Tech Transportation Institute. It reviewed data reported from the Federal Motor Carrier Safety Administration and the National Highway Traffic Safety Administration.

Del Lisk, vice president, safety services, for Lytx, explained in an interview that the study was a follow-up to 2009 research done by Hickman and Virginia Tech for the Federal Motor Carrier Safety Administration.

That research installed the DriveCam system in two trucking fleets, which used the associated coaching program. One fleet reduced risky driving behavior by 37%, the other by 52%. And the occurance of "severe critical events" (basically near-misses), was cut 75.5%, Lisk said.

This follow-up took those original findings and compared them to a large national crash database called the General Estimates System. This GES database included information about the vehicle, injuries and fatalities, violations, and contributing factors for a sample of crashes during calendar years 2010 to 2012.

After some types of crashes were eliminated (ones where the other driver was at fault, where crashes were caused by weather, medical incidents, mechanical problems, etc.), the final data set included 10,648 fatal truck and bus crashes and 213,000 crashes that resulted in injuries. 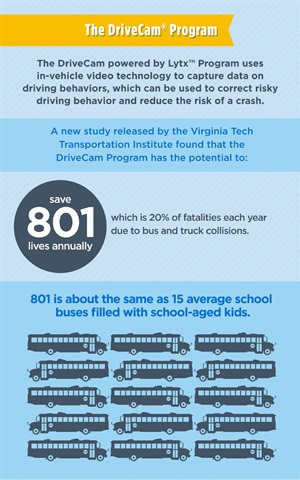 Number-crunching found that trucks and buses equipped with the DriveCam program had the potential to reduce an average of 727 fatal truck and bus crashes (20.5% of the total fatal crashes) and save 801 lives (20% of the total fatalities) each year.

In addition, the system was found to have the potential to eliminate an average of 25,007 truck and bus injury crashes each year (35.2% of the total injury crashes) and prevent 39,066 injuries (35.5%) each year. (Click image at right for full infographic.)

Lisk believes that even more injuries and fatalities could be prevented that weren't quantified in the study – those where the commercial driver not wearing a seatbelt was a factor.

"In some of those fatalities where they weren't the commercial motor vehicle's fault, the fatality of the truck driver may have occurred because they weren't wearing their seatbelt – because that does happen a lot," he explained. "Our program does a stellar job of brining seatbelt compliance up significantly. When we get a new fleet on board, they find out that probably 30% of drivers are frequently not wearing their seat belt, and now they have a mechanism to improve that compliance, usually to near 100%."

“Motor vehicle crashes are often predictable and preventable," said Hickman in the study. "Yet, many drivers choose to behave in ways that put themselves and others at risk for a vehicle crash and/or serious injuries. The most efficacious onboard safety monitoring systems use in-vehicle video technology to gather driving behaviors that can be addressed and corrected, thereby reducing future crash risk.”

Lisk said the study results were what he expected after working closely with fleets that have adopted the technology. "Both personally and as a company, we see how big an impact it has on improving driver behavior," he said, noting that his own son recently turned 16 and he's seen the improvement using the technology in his car has made in his son's driving abilities.

However, Lisk said he and the company would be against a mandate of such technology.

In the report, Hickman cautions that the results assume all truck and bus safety personnel adhere to the training and instructions in the DriveCam Program. "Simply installing an event recorder in a truck or bus without following the DriveCam program will not yield the results shown in the current report," he says.

If such a technology were mandated, Lisk told HDT, there's no guarantee those vital driver coaching steps would be taken.

"It's not just sticking a camera in the vehicle," he explained. "That isn't going to do a lot to move the needle in terms of safety."

The system works by capturing video in front of the vehicle and in the cab continually – but it only records a short loop when something potentially unsafe happens, such as a hard stop or sudden swerve. That triggers a brief video clip, which is then uploaded and reviewed by Lytx personnel. If they determine risky driving was involved, they flag it and bring it to the attention of the client. Then the company or organization can use that information to coach the driver to avoid such behavior in the future.

"That first step is always going to be there," he explained. "But if that second step never happens, if that company never brings the driver in and gives him the ability to see what happened and improve on it, you're really only going to have a crash recorder, not a driver improvement tool."

The Owner-Operator Independent Drivers Association and the American Trucking Associations had very different reactions to the study, according to USA Today.

Norita Taylor, a spokeswoman for the Owner-Operator Independent Drivers Association, said the study "relies on faulty methodology and leaps to conclusions based on inaccurate assumptions and wording regarding truck crashes," saying the study "apparently attempts to substitute technology for thorough driver training and experience."

However, Bill Graves, president and CEO of the American Trucking Associations, said the study "could serve as a model for other crash reduction research efforts."

"Though most serious truck crashes are not preventable by the truck driver since they are initiated by other motorists, this research shows that driver monitoring systems hold great promise for mitigating the remaining preventable crashes," Graves said.

Request a copy of the study