If you want to see a busy place, visit the Port of Charleston, South Carolina. Container operations there are busier after the facility upgraded its automated gate identification to a faster system. Also, the port is seeing more container shipments to the U.S. East Coast since the enlarging of the Panama Canal.

Of course, containers move over highways on special chassis pulled by normal road tractors, which use that gate. Port authorities call each movement in or out  a "truck mission." Within the port, the steel “boxes” are hauled by purpose-built tractors and trailers.

A group of us truck writers saw a lot of them on a recent visit to the port that was sponsored by Mack Trucks and arranged by one of its customers, Pat Barber, founder, president and CEO of Superior Transportation. He set up the tour with port officials, and Mack hired a bus to carry us through the sprawling facility.

The port also has break-bulk and RO-RO (roll-on, roll-off) operations. Barber’s Macks and Kenworths haul machinery and other large, heavy cargoes to and from the break-bulk section using lowboy trailers, some of them with multiple axles.

Huge gantry cranes were unloading the Northern Magnum as our bus rolled up and we got off to watch. About once every minute or two, a steel “box” dropped onto a trailer and a rig moved briskly away, heading toward a “stack” where it would be temporarily stored. Such operations proceed until a ship is relieved of its many loaded containers and then reloaded with a mix of loaded and empty boxes for export. Like other busy ports, Charleston operates 24 hours a day.

Each Panamax-size ship like the one we saw carries 5,000 to 12,000 containers measured by 20-foot-equivalent units, or TEUs.  (Thus a 40-foot-long container is counted as two TEUs.) Larger New Panamax ships, each capable of carrying 13,000 to 14,000 TEUs, have just begun calling, said Cliff Eisenhauer, a port spokesman.

I took note of scores of “hustler” tractors and special trailers, but until this tour, had never heard of their builder: the manufacturing arm of Terminal Investment Corp., or TICO, down near Savanah, Ga. It leases these vehicles to fleets at ports on the East and Gulf coasts, and built about 1,200 Pro-Spotter tractors before it sold its first one, according to its website. It also designed the Pro-Shuttle container-carrying chassis. The company decided to build its own vehicles when it wasn’t satisfied with what was available on the market.

“A chassis is euphemistically called a ‘bomb cart,’” Eisenhauer said. That term’s origin might be because it uses no tie-downs and instead cradles its cargo, like military munitions conveyances used to resupply fighter and bomber aircraft at air bases. Or, it’s because “they’re bomb-proof,” meaning very rugged, explained Andrew Cannon, TICO’s representative for the Carolinas and Florida.

(This has nothing to do with the bomb scare at Charleston earlier this week. Port operations were halted for about seven hours as authorities ran containers from a ship through a radiation scanner, because the phoned-in "tip" said the device was a "dirty bomb" that would've scattered radioactive material. Nothing was found.)

A Pro-Shuttle chassis has a floor of stout steel beams with short, slanted sides that guide a container into place as the gantry crane lowers it. Large, bollard-like pins locate a single 20-foot container about midway on the chassis or, being spring-loaded, are pushed down and out of the way as two 20s or a single 40-footer comes aboard. They are not tied down. Trailers are about 45 feet long and 96 inches wide, Cannon said.

These rigs never leave the port, so are not registered and don’t have lights. Tires are Continental solid rubber, which require virtually no maintenance, and the tandem rear axles are cushioned by steel leaf springs, he said. Tractors and therefore trailers are limited to 25 mph, but both have air brakes so they can stop well.

Pro-Spotters use components familiar to the terminal tractor business, including Cummins QSB Tier 4 Final diesels, Allison 3000 automatic transmissions, and Meritor axles. Fronts are rated at 12,000 pounds and rears at 30,000 pounds. 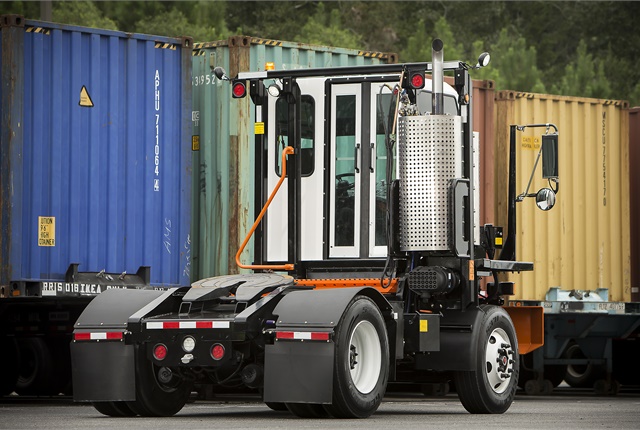 Cabs are fiberglass composite with high-visibility windows and a wide rear passage with air-operated doors through which drivers can move to hook and unhook lines when they’re working with standard container chassis. Customers can change many specifications to suit individual ops, Cannon said.

TICO also makes a road-going Pro-Spotter whose components are EPA-, NHTSA- and DOT-legal. It can run up to 45 mph pulling container chassis among a customer’s factories and warehouses that are separated but linked by city streets.

The fact that more loaded containers come into the Port of Charleston than leave is due to the import-export situation, any economist will tell you. The same is true of other ports in the U.S. Cheap but generally decent-quality products swarm onshore, the result of free trade, the global market, and consumers who almost always buy on price.

While on the bus we passed large stacks of boxes that were empty because exports from America aren’t as numerous as imports. Eisenhauer, the port spokesman, remarked, “There you see a graphic illustration of our balance of trade deficit.”

On the other hand, every week thousands of BMW cars and SUVs are exported from Charleston via RO-RO ships. Bavarian Motor Works builds them at Greer, South Carolina, about 220 miles away. Each night, 800 to 900 come in by train -- an unusally short rail move but efficient in this case. Greer is the German auto maker's largest factory anywhere. So, hurray for "Made in the USA."