Close
C.R. England has always been a company that relies on the practical solution. Back in the 1940s, mechanical refrigeration was new and unreliable, so England cooled its trailers by blowing air across a pile of ice with a belt-driven fan.

That was before England's current president, Chad England, was born, but he inherited the instinct for methods that work.

Keeping the inside of a trailer cool was a simple problem, compared to the one Chad England started taking on in 2004, when he was managing the company's safety, recruiting and driving school programs.

"We were doing everything we could to try and improve our accident rates, but then we had a couple of terrible accidents," he says. "I always had a hard time, and still do, when we have a serious accident. Having two in real close proximity to each other gave me a resolve that we had to try something that was a dramatic departure from what we'd done before."

Over the course of a half-dozen years' work, he and his team worked to meld the latest technology and statistical science into a comprehensive safety management system. Onboard data collection, satellite communication and predictive modeling are a far cry from blowing air across ice, but England proved that they get the job done. The company's accident frequency is down by 30 percent, as are its costs.

There's nothing new about communications and tracking, or onboard management systems that record everything from driver hours to hard stops and lane departures. The application of predictive modeling to trucking is a relatively recent development, though. It involves using a statistical process called regression analysis to correlate a wide range of data with certain types of driver behaviors. From this, fleets can predict the results of driver behavior and circumstances on the road, and put systems in place to reduce the risk of an accident.

Chad and his team initially thought they could do the predictive modeling themselves to create a driver safety scorecard. But that highly technical work was not in their skill set. "We're a trucking company, not a statistical analysis company," Chad explains.

It took several years of work, but they came up with models that showed statistically viable predictors of the frequency and severity of accidents. The models contain thousands of data elements - "every piece of data we could find about the driver, the situation, the accident, the environment," Chad says. "There's no subjectivity to it. You throw all the factors in and you let the science tell you what the causal factors are."

Some of the results made sense intuitively. For example, drivers are at greater risk between 2 a.m. and 5 a.m. due to the natural dip in circadian rhythm at that time. Others did not.

"If the driver had ever received unemployment benefits, then he was at a much greater risk of having an accident," Chad says. "We never would have guessed that."

The harder part of the process was figuring out how to manage this information. It took countless hours to develop the processes and systems to address the particular causes of risk.

An example would be the way a driver's pattern - say, driving a certain number of hours at night - can come up as a predictor of performance in the near future. If it does, then the driver's manager can have him pull over for a rest, or have him come in for training on how to manage his driving time better.

"Real-time data is transmitted to us and within minutes we'll have a safety manager on the phone performing their countermeasure," Chad says.

This produced the dramatic results Chad cited, and not incidentally a promotion for him to president of C.R. England North America. 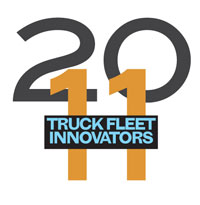 That job put him in charge of all of the company's trucking operations, which include refrigerated and dry van truckload, dedicated contract carriage, cross-border trucking with Mexico, logistics offerings such as brokerage and freight forwarding, and refrigerated intermodal.

It also put him in a position to see that the techniques of predictive modeling could be put to broader use.

"We had a position group, our driver managers, who were in an unwinnable situation," he explains. The tasks they were expected to do were so broad and crossed so many levels that it was extremely difficult to bring new people along.

The company tackled the problem by defining the objectives of the position, such as ensuring on-time service, productivity standards and safe driving, and then used predictive modeling to develop cues that indicate when performance is slipping.

If a driver is getting poor fuel performance, for example, the driver manager will get an alert and can react. "The system has been designed and built to where the manager walks through a step-by-step process in managing that driver, and management can see exactly what has been addressed and what hasn't."

The company has about 100 driver performance exceptions that relate to safety and vehicle performance. "We run a relatively inexperienced driver force, and this approach has allowed us to become better at operating across all levels," Chad says. "Our operating costs have gone down substantially, and we think that a lot of that is due to this exception and countermeasure approach that we learned on the safety side."

Among the technologies that England uses as part of this process are electronic onboard recorders for driver hours of service. The company saw the Federal Motor Carrier Safety Administration's proposed mandate for recorders coming and installed EOBRs and integrated them with its freight selection, freight matching and dispatching systems.

Other technologies in England's trucks are the Mobileye camera-based system for lane departure, forward collision and headway warning, and Chad's favorite, the Meritor Wabco stability control system. England can document a 50 percent improvement in its rollover accident rate from that technology, he says.

The England system reaches into the driver hiring process, as well. The company uses predictive modeling based on information from application forms and other sources to score drivers and select the ones most likely to succeed. "The truth is, we hire only about one in 20 applicants," Chad says.

He believes that as business picks up this year, the market for drivers is going to get tight - "very, very tight," as he put it. "We've got customers knocking down our door trying to make long-term deals with us, trying to secure capacity. It's a great position to be in."

He expects the driver crunch to contribute to continued growth in intermodal for the industry in general and England in particular. With unfolding regulations that will raise the bar for drivers, intermodal will make more sense in certain lanes and certain situations, he says. "We intend to be a big part of that."

The England family has been running the company for 90 years. Chester Rodney England, Chad's great-grandfather, bought his first Model T truck in 1920 to provide service to farmers in Utah.

Chad attributes this longevity to the family's culture of harmony. "Within the family we have a culture of deferring to a philosophy of putting the success of the business above our own personal ambitions or needs," he explains.

Not simple, and certainly not always easy, but like air across ice and predictive modeling, a practical way to do business.