Lately I’ve been zeroing in on drop decks, partly because I’ve always been curious about them, but mostly because I’m writing a story on drop decks for the May issue of HDT. Drop decks are a variation of the many flatbed trailers that carry pipe, steel, lumber, and general construction supplies from plants to where they’re used.

What’s the difference between the two types? You know -- a flatbed has a straight platform (another name for the trailer) that’s the same height from front to rear. A drop deck has, well, a dropped deck. The main deck is usually 20 or more inches lower than the gooseneck structure that houses the kingpin and sits atop the tractor’s rear.

The lower deck of a “single-drop” trailer offers extra vertical space to accommodate things like large coils of steel and aluminum, outsized electrical gear, and boxed or tarped commodities of all kinds. Because of that low deck, wheels and tires are sometimes smaller than the usual 22.5-inch size, usually 19.5s or 17.5s.  A “double drop” has an up-step ahead of the rear tandem to allow use of larger, longer-lasting wheels and tires. Sometimes a double-drop’s deck will be especially close to the ground, like a lowboy trailer.

What enables the low main deck is the “transition” area, the down-step between the two deck heights, and the up-step toward the rear of a double-drop trailer. This takes careful engineering because stresses migrate to a 90-degree bend, and that can cause metal fatigue that leads to cracking and breaking. You sure don’t want that.

Look closely at transition areas, like I did at the Louisville truck show last month, and you’ll see variations in details among the different makes of trailers. But they pretty much resemble one another. A major difference in transition design without regard to brand is what the trailer’s made of. 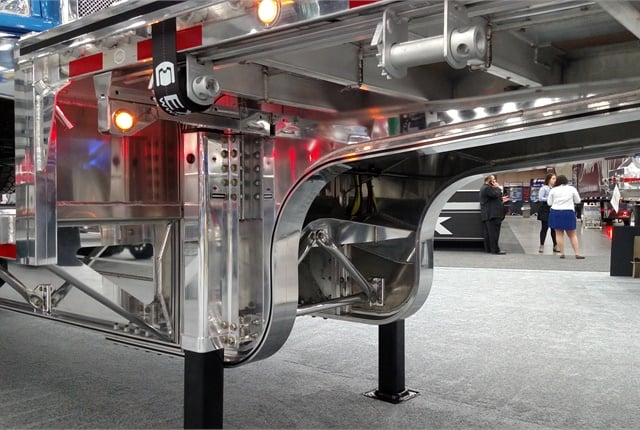 Bill McKenzie of Mac Trailers pointed out that steel is a hard metal and, with proper gusseting, can take stresses at a 90-degree bend. Aluminum, being softer, needs help with a right angle, so engineers use a “radius” structure underneath. The radius evenly distributes weight to the structures of the upper and lower decks, avoiding concentrated stresses and cracking.

I looked at the transition radius on a Mac aluminum drop deck and it occurred to me that the radius is an arc, a portion of an arch – that engineering marvel devised by Roman engineers more than 2,000 years ago.  An arch compresses as weight is added and transfers the weight down its two legs to the ground. The Romans used stone and concrete in their arches, but the principle is the same with metal. McKenzie didn’t say that; I did, but I think I’m right.

So, let’s hear it for the Romans. They never heard of aluminum but did work with other metal alloys to make their helmets and such. It’s too bad they didn’t know that lead is toxic, and they shouldn’t have used it for the fancy plates that ruling-class people dined on. Lead dulled their brains and, scientists believe, sapped their ability to think and govern, contributing to the fall of the Roman Empire. Really.

But aluminum and steel are OK, so go ahead and spread out a meal on the deck of a trailer, straight, dropped or otherwise. Hmm – this is a strange line of thought. Maybe I’ve been ingesting some lead.