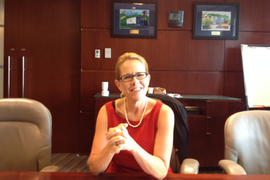 Anne Ferro’s departing message is that the cost of truck and bus safety needs to be distributed more evenly through the supply chain. Too much of the burden falls on drivers who are not paid for all the time they work, said Ferro in an exit interview Thursday with a number of reporters. 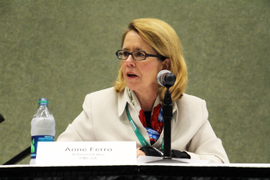 Anne Ferro, who will step down as chief of the Federal Motor Carrier Safety Administration next month, served as administrator during a period of great consequence for truck safety. Washington Editor Oliver Patton takes a look at what she has presided over in her almost five years in the post, as well as early industry reaction to her upcoming departure. 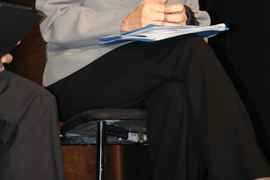 Ferro to Step Down as FMCSA Chief

Anne Ferro will step down next month from her post as chief of the Federal Motor Carrier Safety Administration. She has served as Administrator since 2009. She will become president and CEO of the American Association of Motor Vehicle Administrators. 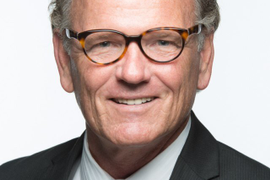 Lane Kidd and the Arkansas Trucking Association are going separate ways. Kidd, 60, served as president of the association for 22 years. He said he is leaving to focus on The Kidd Group, a public affairs and investment group he founded last year. He also will continue to manage the Trucking Alliance.

Mary Phillips, senior vice president for legislative affairs at American Trucking Associations for the past three years, is stepping down from her post. The moves comes as Congress gears up for the next highway bill, a crucial test for trucking interests on Capitol Hill.