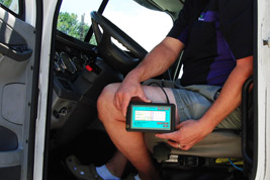 The Federal Motor Carrier Safety Administration opted for the strictest approach it could take in its new requirement for electronic onboard recorders, announced last month

High on the list of carrier concerns about electronic onboard recorders is how to guard the data these devices collect. The information can work both ways: It can protect a carrier, but it also can be used as weapo

Technology for Cost Control: Report From the ALK Conference

There are indications that we are closer to the start of economic recovery - at least, the pace of decline is slowing - but John White, President of U.S. Xpress, is still waiting for inventory numbers to show a turnaround