Brent and Connie Higgins feel fortunate that their fleet of 22 Freightliners has still been rolling, even as business dropped off significantly in early April.

Brent Higgins Trucking, based in Mullberry, Arkansas, is a regional operation hauling fresh and refrigerated products. As a part of the food manufacturing and distribution supply chain, its business has not been hit hard by the economic shutdown caused by the COVID-19 pandemic.

In fact, the first effect, like many other refrigerated fleets, was being offered more business than they could handle.

Founder and General Manager Brent Higgins says thing started happening after the NCAA March 12 cancellation of its remaining spring basketball championships. Although there already had been stories in the news and on social media about toilet paper and hand sanitizer hoarding, this was when people started hitting the grocery stores.

“We really started getting busy,” he recalls. “We had double the shipments going to the Walmart [distribution center] in Clarksville.”

Vice President Connie Higgins says the company handled it much like they would any other busy time of year, like Thanksgiving or Christmas.

“Everyone has had to really step it up,” she says. “Whether it's long hours for fulfilling the extra deliveries and shipments, to sanitizing every truck, every office.”

The Higgins’ employees are all still working in the office, following social distancing guidelines, not allowing visitors – and keeping things really clean.

“This place is getting scoured,” Brent says.

“It's always been one of the cleanest mechanic shops and facilities most of our employees and vendors have seen,” Connie says. “Now it's even a step up above that.”

Drivers have been provided with hand sanitizer, and “each and every driver and truck has its own bottle of premixed bleach cleaner as well as heavy-duty shop towels provided by us,” Connie says.

Like many fleets, Higgins found face masks hard to come by. “We ordered some back in February, the surgical ones, but every one of our orders were ended up being canceled to provide for the medical fields of course,” Connie says. “So one of our T-shirt providers actually stepped in and made some for us.” Drivers were also instructed to use clean bandanas or other makeshift options if need be.

Things to Consider When Choosing a Telematics Solution

Download this white paper to learn what key questions to ensure you purchase the right GPS fleet tracking and telematics solution that meets your specific business needs. 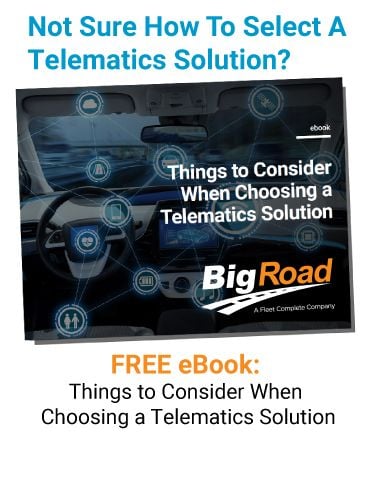 After the first week in April, business slowed way down. Even then, however, the Higgins say they have been fortunate that their regular customers are still keeping them rolling, especially given the way rates have plummeted in the spot market.

In addition to the good fortune of being in a business that hasn’t gone away during the pandemic, Brent believes the company’s commitment to on-time service is helping it stay busy.

“Our customers that count on service hired us to haul their Walmart loads, you know, because Walmart charges them for being late,” he says. “We carry 100% on time for probably about 18 weeks straight with some of our customers. And we're always one of their top tier carriers.”

Even though business has slowed, Brent says, “When I walked outside here yesterday, our parking lot's empty – not a truck, not a trailer, even though we're talking about it being slower than it was five days ago.”

The two acknowledge that not everyone has been as fortunate. “Other sectors of trucking, they really have nothing to do,” Brent says. “People in the automotive business, clothing, food service, I mean they got nothing going.”

“We've just been fortunate to not have to park any equipment or have any layoffs,” Connie adds.

You also may like: How Veritable Vegetable Cares for Employees, Clients, Community During COVID-19 Pandemic