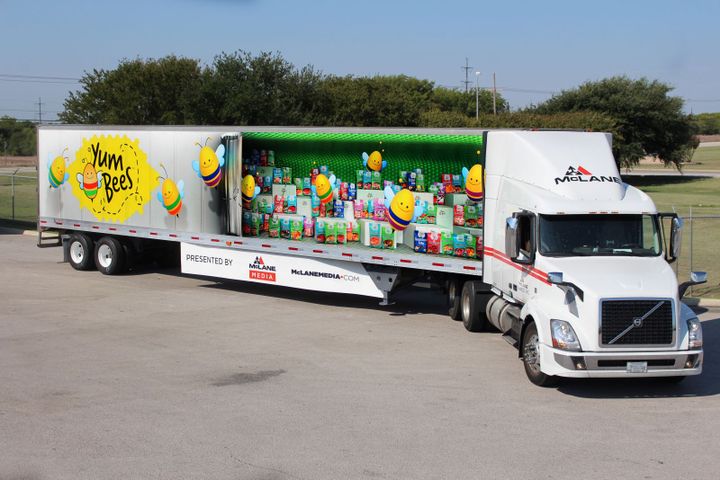 What can changeable graphic films do for your fleet?

Similar to long-term graphics, short-term graphics are great for increasing brand awareness and visibility – the key difference is ultra-removability. In addition, changeable graphics can be more economical than other film solutions.

Changeable graphic films are vinyl films engineered for short-term use. 3M changeable graphics are flexible, durable and conformable. The expected performance life of these films is up to two years; however, they are often kept for shorter periods of time.

How to use Changeable Graphic Films

Changeable films are a great option for fleets looking to quickly apply and remove graphics. Many fleets use changeable graphics for:

McLane is one of the largest supply chain leaders in the United States. McLane’s fleet delivers more than 50,000 consumer products to nearly 110,000 locations – making their fleet one of the most visible in the nation.

Recognizing an opportunity to monetize their vehicle space, McLane implemented a co-op program that gives brands access to their fleet of 5,000+ trucks and the millions of potential customers they pass every day.

“With the ability to distribute across the nation and target specific regions of the country, it’s easy for us to be wherever our customers need us to be,” said Corey Preuninger, Manager of Special Operations. “We can help these businesses by allowing them to utilize fleet graphics as an effective way to advertise their brand.”

In order to fuel this piece of their business, changeable graphics are critical. The easy removal process of changeable films works well with McLane’s operations and ensures they’re able to provide services to more advertisers.

When considering changeable solutions, 3M graphic films were selected for the following reasons:

“Not only is 3M a leader in the industry, they have been a good partner to us,” said Preuninger. “We never have to worry about product performance when it has their name on it.”

When working with brands, McLane asks advertisers to provide the designs for their graphics, determine the length of their campaign and select the geographical area to target. McLane then uses this information to determine the number of trailers and size of trailers needed for the job. Once trailers are identified, the graphics installation is scheduled, and the trucks are on the road delivering impressions in no time. Brands find fleet co-op advertising an efficient channel as it only costs about $3,000-$5,000 to wrap an entire 50-foot trailer along with a nominal advertising fee. This leads to an efficient CPM (cost-per-thousand-impressions) when compared to other out of home media.

“Compared to billboards, fleet graphics are not static – they move around, and people don’t get used to seeing them every day in the same spot on their commute,” said Preuninger. In comparison to digital advertising, Preuninger noted, “You can skip an ad online, but you can’t skip over a huge trailer.” Preuninger also highlighted that their fleet delivers to several convenience stores and retailers, so the trucks are able to provide advertising at point of purchase.

The flexibility that comes with ultra-removable films makes changeable graphics an appealing option for fleet managers and marketers alike. To meet your short-term branding needs, consider adding changeable films to your fleet branding.

To get started with a graphics project or learn more about 3M fleet solutions, visit 3m.com/fleet.