Devastating floods from Hurricane Harvey’s rains have prompted thousands of rescues in southeast Texas, many involving “high water vehicles,” as PBS and CNN news reports early this week called them. As the emergency unfolded, such vehicles took many shapes, some military and some civilian.

And now we learn that explosions at a chemical plant near Houston involved refrigerated trailers that stored temperature-sensitive compounds. Arkema Inc., in Crosby, Texas, about 25 miles northeast of Houston, had warned that organic peroxides were in danger of igniting because electric power needed to cool them was lost. 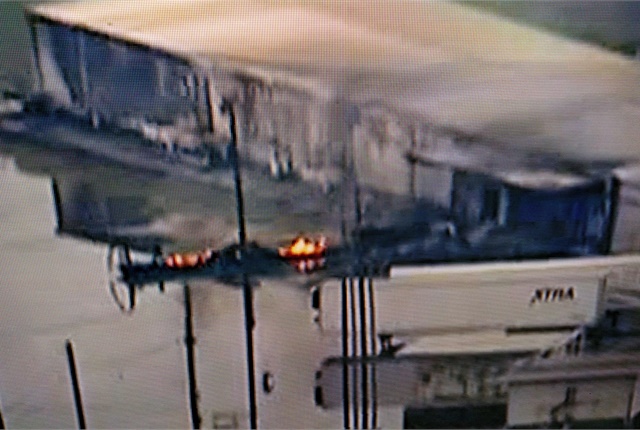 The compounds were stored in “18-wheeler box vans” on the premises, according to a county fire chief interviewed on NBC’s Today program. Contaminated fuel caused the reefer units to fail and the chemicals heated up; about 1 a.m. local time on Thursday, the first of several explosions -- company officials called them "combustions" -- occurred.

Much more positive and heartening roles were played by trucks whose crews set out into deep waters to rescue stranded residents in the region as Harvey stormed ashore. Many were military trucks built to ford deep waters, some operated by National Guard units who were among the first of the first responders to the emergency. Also quick to act were city crews with municipal trucks, and civilians who used their own trucks and trailers to help neighbors.

Footage shot by news crews showed Army-design 2.5- and 5-ton trucks, whose high chassis, tall wheels, water-proof ignitions, and lofty air intakes allowed them to operate normally where most other trucks and cars stalled. These were vital in early stages of the storm when strong winds and blinding rain kept aircraft away.

I found one unusual example in a civilian-owned ex-military vehicle: A “massive truck” from Kansas City headed to the Houston area, dispatched by the owner of Stonehenge Landscape & Design in Kansas City. The firm has a surplus Oshkosh 8x8 heavy equipment transporter it uses to haul decorative boulders, and it’s ideal for high-water rescue work.

As reported by Fox4 TV News, a crew sent by the company’s owner, Spencer Sherf, had previously rescued a family stranded by high water in Overland Park. When he heard news about Harvey, he offered the truck to Texas authorities. “Get that thing down here,” he was told. “You could be a lot of help right now.” A crew loaded it with emergency supplies, including an inflatable boat, and headed south.

Closer to the action was another “massive” (in civilian eyes) truck, owned by 8th Wonder Brewery in downtown Houston. Its employees went out on rescue missions, as reported by Eater, an online feature service. The truck, which appears to be an old-series 5-ton 6x6 cargo transporter once common in military inventories, apparently is used for promotional purposes by the business. This is the finest kind of promotion work it could do.

Much more normal was a round-bottom end-dump trailer (pictured at top of this story) I spotted on a newscast Wednesday evening. It was carrying a dozen or so people to high ground, presumably following their transfer to the tall trailer from smaller vehicles. Who owns that rig was not reported, but generosity was so normal that it has become anonymous. And whatever works is being used.

Harvey, which is still blowing hard and dumping huge amounts of rain as it moves northeast, is an epoch event whose terrible effects will rival that of Katrina and other earlier hurricanes. Trucks will be vital to cleanup and recovery efforts for years to come. And the noble people who operate them are examples of how tragedy brings out the best of humanity.

Related: Hurricane Harvey Could Disrupt Trucking for Some Time