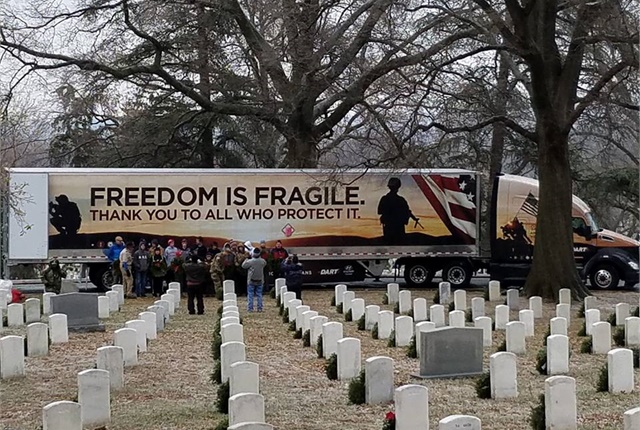 It’s happened every year for a quarter century, and it’s as impressive and touching each time. That’s Wreaths Across America, the annual effort in the weeks before Christmas to load, haul and distribute evergreen wreaths to military cemeteries for placement on the graves of deceased service members. That happens on the third Saturday in December.

Thousands of volunteers do it, and many are truckers who know that freedom is bought and paid for by the sacrifices of soldiers, sailors, marines, and airmen, so many of whom have died while serving our country.

The Truckload Carriers Association and American Trucking Associations are among the organization’s sponsors, and some of its members participate by lending equipment used in the haul. Some of the vehicles carry special graphics honoring the military.  One of TCA’s member companies involved is Dart Transit, which outfitted three tractors and trailers for this year’s occasion.

Missing Word Solutions, which produces podcasts for Dart, alerted us to that fleet's involvement, and sent us a link to the Wreaths Facebook page where scores of photos show scenes from this year’s effort. Click through it and you’ll see rigs from companies you know, like Schneider out of Green Bay, Wisconsin, and some you might not know, like Poland Springs, which bottles water near Portland, Maine. And you'll see the faces of the many men, women and children volunteers.

Arlington National Cemetery in Virginia was the destination of the first shipment of Christmas wreaths in 1992, and is still included. ATA's Share the Road program sponsored a rig this year, and it carried 3,500 wreaths to Arlington. More than 1 million wreaths were hauled to cemeteries around the country and overseas, an ATA statement said.

Many other cemeteries now get them. One is the relatively obscure North Dakota Veterans Cemetery at Bismarck, where 472 people came to place the wreaths. "Many cleared snow for those who weren't able to so that wreaths would be leaning against headstones properly," according to a Facebook posting.

A Dart o-o, Pat Wortham, hauled a load of wreaths there. In an interview with Greg Thompson of Missing Word, Wortham explains why he did the run. That podcast also tells the inspiring history of Wreaths. It’s well worth a listen. 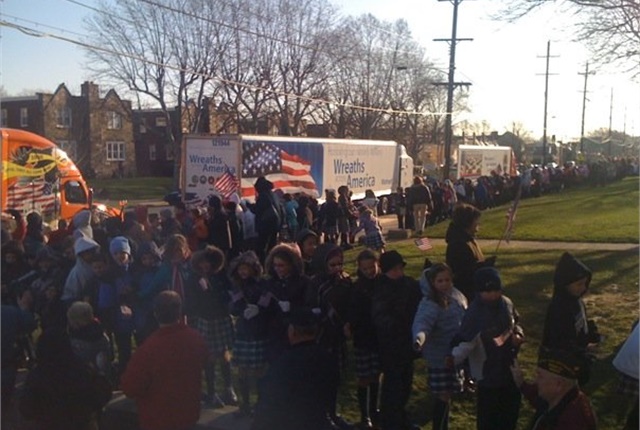