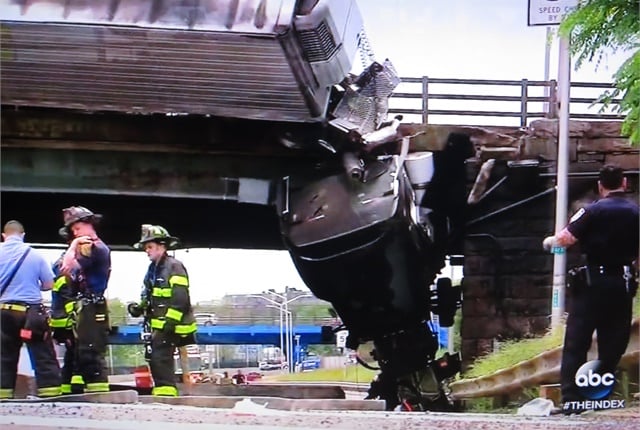 Whoa, look at this! A big rig skidded and slipped partly off the edge of a bridge on the Cross-Bronx Expressway in New York City, leaving the reefer trailer on its side still on the span, and the tractor dangling with its nose facing the street below. The images were so compelling that ABC put them on its World News Tonight show the evening of Memorial Day.

To Joe Public it’s probably amazing that the tractor stayed hanging there instead of breaking loose and falling onto the street. That was my first reaction, too, but then I thought about the strength built into fifth wheels and trailer kingpins. They are very strong, so of course the two vehicles would hold together, right?

That depends, according to experts at two companies that make fifth wheels, Fontaine and Jost International. If it’s just a matter of supporting the tractor weighing maybe 20,000 pounds, that’s well within the ratings of its coupling mechanisms. A fifth wheel for a road tractor is tested to withstand 150,000 pounds of drawbar force, said Greg Laarman, Jost's vice president of engineering.

“A fifth wheel and its jaws, and the kingpin and upper coupler assembly, all their components — they’re all like links in a chain, and they’re all tested to a 150,000-pound drawbar load” for normal, 80,000-pound highway service, he said. “So it’s not surprising at all” that the tractor would be supported. ”In fact, we would expect that to happen.”

Tom Moulton, Fontaine's test lab manager, agreed, and added that there’s also a 50,000 to 55,000-pound vertical rating, which might also have come into play in this accident.

“Those standards were set through the marketplace in general,” he said. “There are ISO [International Standards Organization] standards, 8717, and European Union standards, ECE-55. Since we all supply fifth wheels to those markets, I believe we all build and test to them. Fontaine has additional internal tests that go beyond the international standards.”

Interestingly, there is no federal government strength requirement, such as from the National Highway Traffic Safety Administration, or even from the Society of Automotive Engineers, Moulton said. SAE once had a committee that considered heavy-duty coupling standards, but members decided to defer to the ISO and European numbers.

The Fontaine and Jost engineers also noted that crashes often involve much stronger dynamic forces that occur in collisions, and they determine whether the coupling holds together. “It depends on what kind of forces are involved – the speed of the vehicle, and how fast it’s stopping,” Laarman said, citing an equation involving mass and velocity.

“A truck might be going 65 mph and hit something solid or run into a ditch, and decelerate to zero in a tenth of a second. The force can become very large,” he said, and the coupling could break. “If you had to make a coupling device strong enough to hold against any collision, you would not have room to haul any freight.”

We can surmise that this wreck in New York might have involved some powerful dynamic forces as the rig smashed against the bridge’s railings and the tractor plunged off the span, jarring to a stop in midair. But they, too, were within the coupling mechanisms’ limits.

Now, if I had been more humane, I’d have stated this tale with, “My gosh, what happened to the driver?” He scrambled out of the cab and hopped to the ground, and is fine, ABC reported. But he might still be explaining to authorities and his boss how his rig got into that precarious position.

Related: Unlucky Tip Over on the Tappan Zee Bridge