Profit for the Tennessee-based parent to Covenant Transport plummeted in the third quarter, while Landstar System Inc. (NASDAQ: LSTR) recorded only a 7.6% decline, according to numbers released late Wednesday afternoon.

Total revenue was $164.5 million, 5.2% less than in the third quarter of 2015, while freight revenue of $148.2 million dropped 3.4%. Both earnings and revenue were below market expectations. Operating income totaled $5.4 million compared with $14.6 million a year earlier.

The company had warned just a few days earlier that its earnings would be down significantly.

“The trucking environment in the third quarter was characterized by moderate freight volumes, and a depressed market for used tractors," said Chairman and CEO David R. Parker. "To combat these forces, we are taking steps to modestly reduce certain portions of our fleet, conserve capital expenditures [and] emphasize driver retention.”

Covenant is addressing the used equipment market by accelerating the depreciation rate on most of its tractors, and is in the process of “enhancing the management personnel and processes to improve the efficiency of its financially troubled refrigerated service offering, Southern Refrigerated Transport.”

Not all the news was bad for Covenant, according to Parker. "In our expedited and dedicated service offerings, we experienced some strengthening of supply-demand dynamics sequentially. Compared with the second quarter of 2016, quarterly miles per tractor improved 3% in the expedited unit and 2.1% in the dedicated unit, respectively. Compared with the second quarter of 2016, average freight revenue per total mile increased 1.1% in the expedited unit and decreased 0.2% in the dedicated unit.”

He did say at SRT, miles per tractor and average freight revenue per total mile continued to be “under pressure while we attempt to re-engineer our freight network in a difficult environment.” SRT experienced a sequential decline in average freight revenue per tractor of 4.2% compared with the second quarter of 2016 and a year-over-year decline of 11% compared with the third quarter of 2015. It also experienced the third straight quarter of an operating loss.

At Florida-based Landstar, the news was relatively brighter. Net income for its fiscal third quarter totalled $36.3 million, or 86 cents per share, falling 7.6%, from $39.3 million, or 90 cents per share a year earlier. Revenue slipped to $788 million from $842 million. This latest per-share performance was 5 cents better than a consensus estimate by analysts.

Gross profit, which the company defines as revenue less the cost of purchased transportation and commissions to agents, was $121.8 million in the 2016 third quarter compared to $126.8 million a year earlier.

Truck transportation revenue hauled by independent contractors and truck brokerage carriers in the 2016 third quarter totaled $732.9 million, or 93% of revenue, the same  percentage as a year earlier, but the year ago figure was higher at $779.8 million.

According to Landstar, revenue per load on loads hauled via truck in the 2016 third quarter was 5% below the 2015 third quarter. However, Gattoni pointed out, this represents a sequential improvement.

Also, the average cost of a gallon of diesel fuel was approximately 10% lower during the 2016 third quarter compared to the 2015 third quarter, putting additional pressure on pricing, especially as it related to loads hauled via truck brokerage carriers, according to the company.

Gattoni said the softer pricing environment contributed to the decline in the 2016 third quarter operating margin, which was 48%, compared to 50.4% in the 2015 third quarter.

Looking at the current fourth quarter, Gattoni said, "I expect the slow growth environment we have experienced during the first three quarters of 2016 to continue through the 2016 fourth quarter. As was the case in our 2016 second and third quarters, fourth quarter 2016 over fourth quarter 2015 revenue comparisons will include the effects of revenue derived from [an] automotive project.” Landstar’s 2015 fourth quarter included approximately $38 million in revenue from approximately 19,000 loads hauled via truck related to that project.

Landstar's fiscal year ends on the last Saturday of the calendar year, which this year is Dec. 31, 2016, resulting in fiscal year 2016 representing a 53-week period. Because of this, its 2016 fourth quarter includes an extra week of operations.

He added, that assuming insurance and claims cost are in line are in line with previous years, the company expects earnings per share to be in a range of 85 cents to 90 cents in the 2016 fourth quarter. A new report issued by the U.S. National Science and Technology Council and the U.S. Department of Transportation laid out the Trump administration’s plans to stake out a leadership role for the country in the global race to develop autonomous vehicle technology.

How Freight Visibility is Evolving 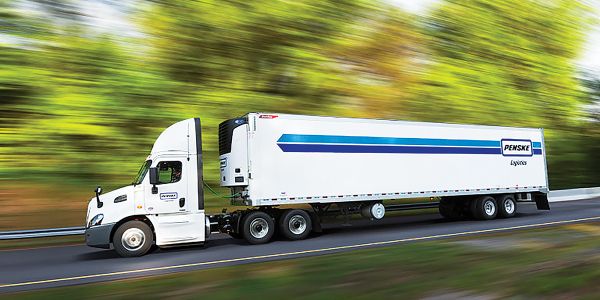 Long before the information technology revolution, “Where’s my load?” was a constant question from shippers. Technology has made providing an answer much easier for carriers.