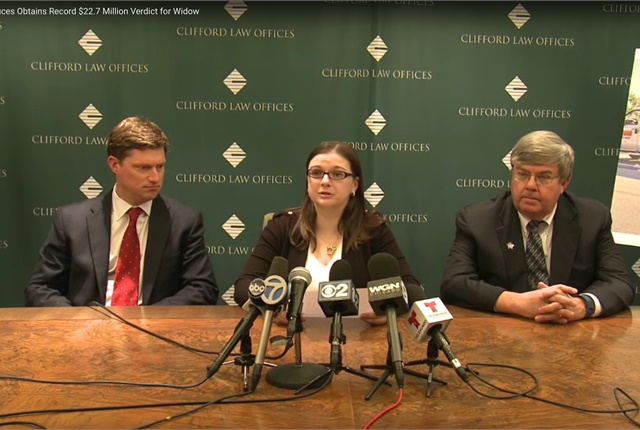 A wrongful death lawsuit filed in Cook County, Ill., against a Missouri-based food refrigeration systems company and a former company fleet driver has resulted in a $22.7 million jury award.

The case revolved around a May 2012 fatal crash on Interstate 294, the southern part of the Tri-State Tollway in Illinois. Aaron Swenson, a 31-year-old private investigator, was stopped in morning traffic in a construction zone when a fleet van driven by Hussmann Corp. employee Adam Troy rear-ended Swenson’s car and rammed it into a truck stopped ahead.

A criminal case against Troy is still pending.

“The Illinois State Police lab showed that there were multiple narcotics in [Troy’s] blood,” attorney Colin Dunn said during a press conference held the day after the April 25 verdict. Urine tests, he added, indicated the same drugs as well as marijuana.

Additionally, Dunn said, crash event data recorders showed that Troy was traveling at approximately 57 mph at the time of impact and hadn’t applied the brakes — even though traffic ahead had been stopped for some time.

“In fact, within three seconds of the impact he had actually hit the accelerator,” Dunn said. The impact triggered a five-vehicle collision.

Dunn and Kevin Durkin, partners at Clifford Law Offices in Chicago, represented Theresa Swenson in the case. The $22.7 million award is the largest in Cook County for a wrongful death case in more than a decade. After the two-week trial in Chicago ended, the jury took just three hours to reach its verdict.

Jeffrey Lipe and Jordan Tank, two of the attorneys for the defendants, didn’t respond to requests for comment about the verdict or possible appeal plans.

Theresa Swenson, now 31 and living in Chicago, praised her attorneys’ efforts and the jury’s decision. But she noted she has struggled to deal with the sudden loss of her husband the past four years. Since the accident, she has graduated law school and passed the bar.

“Although civil justice is dispensed in the only way it knows how, through a verdict, it nonetheless sends a message to the defendants that they have to be more careful, that vans can kill, that you have to monitor your drivers, and that you have to screen them more carefully,” Swenson said.

Dunn acknowledged that Hussmann Corp. has a drug-testing program in place for its drivers, but the attorney characterized the program as insufficient.

“This company needs to do a better job monitoring its drivers because we don’t think what happened that morning was an aberration,” Dunn said. He also alleged that Troy had a history of speeding tickets.

Swenson’s case was consolidated with another lawsuit filed by Joseph LeSanche, the driver of the truck that Aaron Swenson’s car struck after being rear-ended by the Hussmann van. LeSanche, now 25, filed suit against the same defendants about six months after the accident, according to the Chicago Daily Law Bulletin.

LeSanche’s attorneys argued that he suffered serious back injuries in the crash and has developed chronic pain that extends to his legs, requiring lifelong medical care. LeSanche’s case was tried at the same time as Swenson’s case. The jury awarded LeSanche $12.3 million.

To view the Clifford Law Offices' press conference following the verdict, click on the photo or link below the headline.