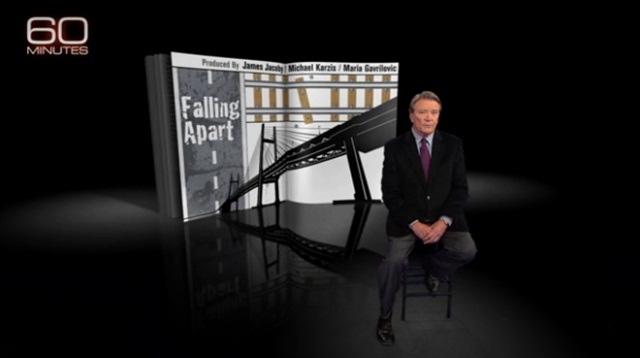 In a segment on 60 Minutes last Sunday, reporter Steve Kroft took a look at the nation's crumbling transportation infrastructure. In the report entitled "Falling Apart: America's Neglected Infrastructure", Kroft found that despite mounting evidence of a need for an overhaul, our roads and bridges are unlikely to get meaningful attention any time soon.

Speaking with former U.S. Secretary of Transportation Ray Lahood and several other transportation advocates in government and business, 60 Minutes paints a dire picture of our ailing infrastructure and unresponsive government.

Funding a comprehensive reform will be expensive, possibly in the hundreds of billions of dollars. but neither party is willing to suggest unpopular tax hikes on citizens or businesses to pay for it. With two presidencies since the last major infrastructure bill, it seems unlikely to change.

According to 60 Minutes, one out of nine bridges in the U.S. is in need of replacement or serious repair. Bridges built in the 1940s and '50s, designed to last 50 years, are still in constant heavy use, occasionally resulting in devastating collapse.

Nearly a third of all the roads are deemed to be in poor condition. Currently the U.S. ranks 16th in the world when it comes to transportation infrastructure, a far fall from the top spot it used to hold.

The 60 Minutes report is a fascinating look at an important problem that is likely to affect us all for a long time to come.

Highway Bill: Nowhere to Go But Up