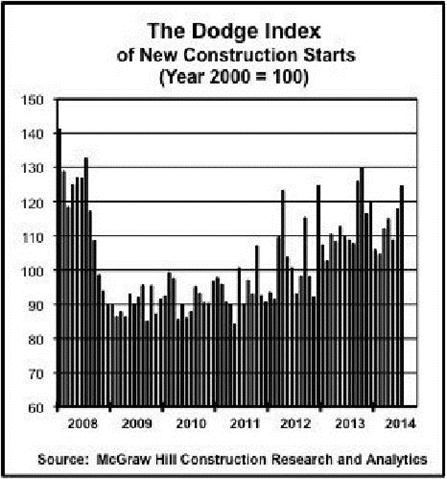 For the first seven months of 2014, total construction starts on an unadjusted basis were reported at $311.6 billion, a 4% gain compared to the same period a year ago.

"The construction expansion this year is getting more of a contribution from nonresidential building," said Robert A. Murray, chief economist and vice president for McGraw Hill Construction. "Manufacturing plant construction is seeing the start of numerous chemical and energy-related projects, consistent with the nation's growing energy sector. Commercial building is maintaining its upward momentum from low levels, while institutional building with its up-and-down pattern appears to be stabilizing after a lengthy decline”

By geography, total construction starts in the first seven months of 2014 revealed gains in two regions; the South Central, up 18%; and the Northeast, up 5%. The West was unchanged from the same period a year ago, while declines were posted by the Midwest, down 1%; and the South Atlantic, down 3%.