Close
Researchers at the Virginia Tech Transportation Institute are in the early stages of an idea to move stop and yield signs from the side of the road into the car itself, where a dashboard screen will automatically alert the driver of what actions to take, if any.

Alexandria Noble, a master’s student with the Virginia Tech Charles E. Via Jr. Department of Civil and Environmental Engineering, is spearheading the proof of concept adaptive stop-yield study with funding from the U.S. Department of Transportation.

The project directly ties into the institute’s growing endeavor into connected-vehicle technology, a futuristic intranet-like grid system where “smart” cars and other vehicles will be able to communicate not only with each other but surrounding infrastructure to help prevent auto crashes and ease congestion.

Noble recently finished a 17-week closed experiment directly behind the institute’s main base, involving dozens of local test participants, aged 18-25 and then older than 50, in cars outfitted with small GPS-like dashboard screens that would alert the driver with a flashing display to either stop or yield, and proceed through the intersection.

Institute researchers trained to safely interact with the participant driving test vehicles drove additional cars at intersections during the tests.

Cameras set up inside the institute-provided test vehicle filmed test subjects, capturing images of the motorist’s upper body, line of sight, the dashboard, and the vehicle itself. Also part of the test, were scenarios where the automated sign technology was allowed to fail, leaving the test subject to act on their own accord.

“This study was set up to take place in a future where all static traffic control infrastructure, such as stop signs and yield signs, are no longer needed, and you have an adaptable in-vehicle display telling you when you need to stop and when a stop is unnecessary,” said Noble.

“The deployment of this technology in the real world would involve a whole re-working of the transportation system and is not likely to be deployed in the near future,” she said. “However, this study will be useful in developing future connected-vehicle applications in a general sense and demonstrates that this is possible and how well it is received by naive drivers with minimal training on the subject.”

The project is only beginning, according to the university, noting this idea has not been tested in real traffic environments. Hours of footage of tests subjects will be reviewed and compared to that of drivers filmed during naturalistic conditions in separate institute studies.

Reasons for bringing traffic signage and warnings directly into cars are many according to the university. Roadside stop and yield signs are often overlooked or outright ignored. Physical signs also are costly, they must be kept up, replaced when damaged, and there’s always the danger of a sign being stolen or covered by tree growth.

Other traffic signs also only have limited use. For example, “Bridge Freezes Before Road” signs. Such signs may be needed during most winter days in, say, Rhode Island, but during summer it’s not likely. And in a warm state such as Alabama, even during winter, its need is rare. Adaptive in-car warnings would be better for the driver, as and when needed, according to researchers. 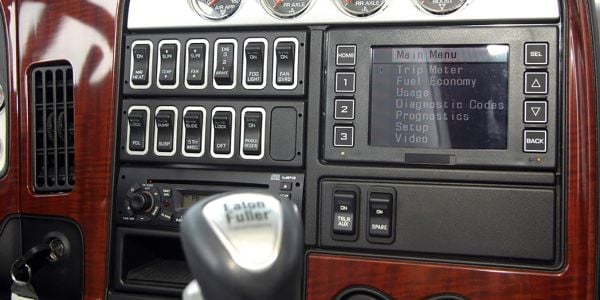