Over the past decade Green APU has built a reputation with its reliable, durable, easy-to-maintain, cost-effective auxiliary power units. And while its innovations have helped truck fleets across the country—Green APU was born out of necessity: Art Logistics Inc., Green APU’s parent company, was frustrated that there wasn’t the kind of dependable APU its drivers needed on the market.

So, instead, of waiting for the market to deliver, Art Logistics took matters into its own hands and founded Green APU. Within a year, the first Green APU unit was rolling off the assembly line, delivering low cost of ownership, easy and inexpensive maintenance, and readily available parts. Most importantly, it was an APU that durable and dependable in all types of conditions.

Art Logistics relies on Green APU to this day, and the companies have a significant complementary relationship.

All Green APU units are first tested on Art Logistics’ 100-plus trucks in the field to make sure they meet the durable, reliable standards established with the first-generation Green APU a decade ago. In addition to this on-the-road testing, Green APU conducts extensive laboratory testing.

The company ha been successfully innovative from its inception by conduction extensive research and development, analyzing service data to determine the most effective areas of improvement, as well as bringing in additional talent with years of industry experience.

The result has been an ever-increasing refinement and improvement of its signature APU.

While it could have rested on its laurels, the fourth-generation unit, which featured a 3-cylinder Kubota engine, was a significant market success, Green APU continued looking ahead, finding ways to build o 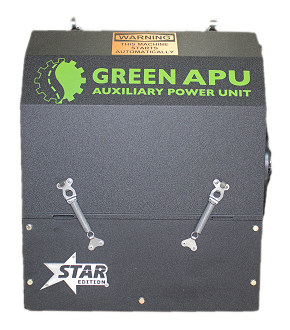 The result is the company’s fifth-generation APU, the Green APU Star Edition, which incorporates a single serpentine belt system with spring tensioner.

This innovation builds on the success by retaining the proven 3-cylinder Kubota engine used in the fourth-generation units. The new single belt system not only has a useful life that is more than three times that of a traditional V belt setup, but also reduces costs and maintenance; improving lifecycle costs and return on investment. The new unit eliminates the need to adjust belts. Routine maintenance is simplified, because the belt and tensioner can be purchased at local auto parts stores.

As with all of the previous generations of the Green APU, extensive testing was performed in the company’s lab and in the field. All 120 trucks in Art Logistics’ fleet was equipped with the fifth-generation model prior to going to market.

The Star Edition is manufactured and assembled at Green APU’s Chicago area plant. And even in the midst of the challenges caused by the COVID-19 pandemic, it continues to add to its skilled head count, a sign of the company’s strength and ability to stand behind its product.

There can be little argument that COVID-19 has posed some of the biggest challenges for fleets and business in general.

And when business slowed at the beginning of the pandemic Art Logistics Owner and Green APU Founder Arek Gruszka and General Manager Greg Ciszek didn’t sit idly by hoping for the best. Instead they hit the road in a demo unit to meet with potential customers and distributors.

Their multi state journey throughout the South and Northeast was a success, solidifying and increasing Green APU’s distribution network in 15 additional states.

Taken together, Green APU is entering its second decade with an improved product and increased sales from an expanded marketplace.

To learn more about Green APU and if it is the right APU for your operation, contact Green APU at 877-751-0686.  Dealer opportunities are also available.